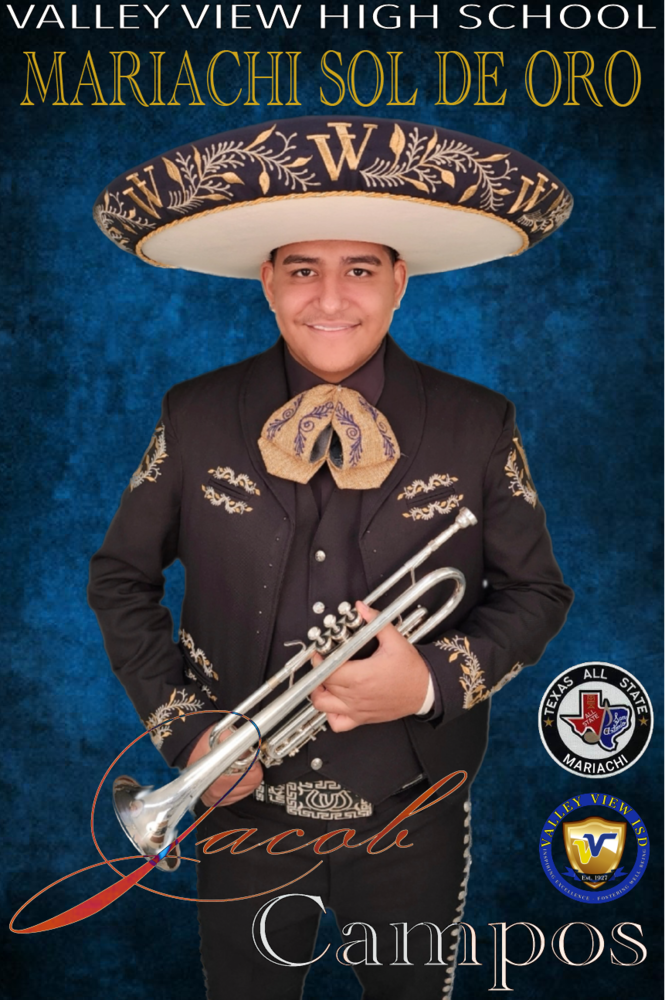 Jacob Campos, a member of the Valley View High School Mariachi "Sol De Oro," will perform with the Texas All-State Mariachi in San Antonio Saturday, February 11, 2023, at the Henry B. González Convention Center as part of the 2023 Texas Music Educators Association Clinic/Convention.

Jacob Campos was chosen for this prestigious honor through a competitive process held this year across the state at District, Region, and Area levels. Jacob is a student of Juan Lopez and plays Trumpet at school under the direction of Juan Lopez, who is a member of the Texas Music Educators Association, a 14,000+ member organization headquartered in Austin. This is Jacob's first time performing as a member of a TMEA All-State organization. Jacob is the child of Angela Hildebrandt and Jose Campos.

Texas Music Educators Association sponsors the Texas All-State competition. This competitive process begins throughout the state in auditions hosted by 33 TMEA Regions. Individual musicians perform selected music for a panel of judges who rank each instrument or voice part. From this ranking, a select group of musicians advances from their Region to compete against musicians from other areas in eight TMEA Area competitions. The highest-ranking musicians judged at the TMEA Area competitions qualify to perform in a TMEA All-State music group. Only the top 2.6% of musicians who initially audition become All-State musicians.

These All-State students participate in four days of rehearsals directed by nationally recognized conductors during the TMEA Clinic/Convention. Their performances for thousands of attendees bring this extraordinary event to a close. For the All-State concert and conductor information, go to the Performances section of www.tmea.org/convention.

Founded in 1921, Texas Music Educators Association is an association of over 14,000 members dedicated to promoting excellence in music education. Go to www.tmea.org/convention for more information.